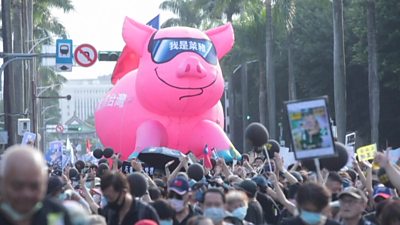 Tens of thousands of protesters have marched in Taipei for Taiwan’s annual “Autumn Struggle” demonstrations.

On the agenda were education and freedom of speech, as well as the government’s decision to ease a ban on imports of US pork with the additive ractopamine.

The additive is currently banned for pig use in Taiwan, as well as in China and the European Union, due to concerns about safety for animals and humans.