Bhabiji Ghar Par Hain is one of the popular shows on television. The show was in the news for Saumya Tandon’s exit and her replacement reports. Also, recently, the show completed 1,400 episodes and the team celebrated the occasion. Now, the show is hitting the headlines for yet another reason! Aasif Sheikh and Rohitashv Gour recently shared a kiss on the show, which has become a hot topic of discussion on the internet!

The context behind the kiss will only be known when the particular episode will be aired on television. His ex co-star Saumya Tandon has reacted to the same.

Saumya, who played the role of Anita Bhabi in the show (recently exited the show), noticed the image and replied with ‘see no evil monkey’ emoji. Yogesh Tripathi, who plays the role of Daroga Happu Singh in the show, wrote, “Aree Dadaaaa.”

While a few users were surprised with the picture, some of them found it funny and shared laughing emojis. Take a look at a few users’ comments!

(Social media posts are not edited) 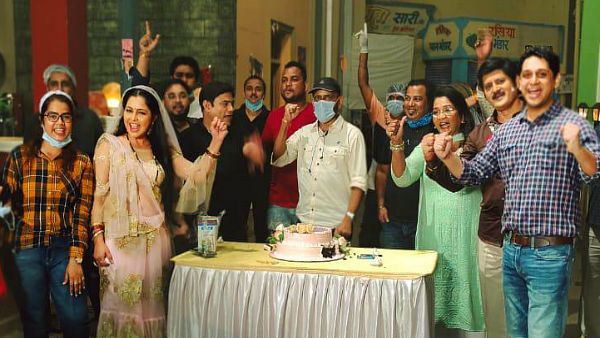