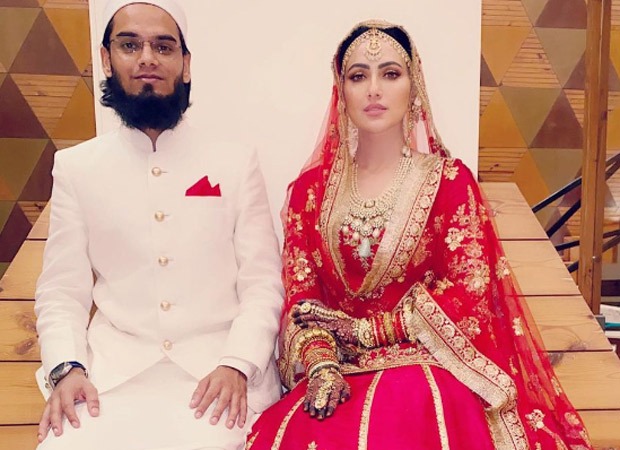 Earlier in October, Sana Khan announced that she has decided to quit the showbiz and will live to serve humanity henceforth. Over a month later, the former actress has now secretly tied the knot with Mufti Anas in Surat. After the videos from her wedding went viral on Saturday, she posted the first wedding picture on Sunday.

Dressed in a red bridal lehenga, Sana Khan posted a photo with her husband Mufti Anas. “Loved each other for the sake of Allah. Married each other for the sake of Allah. May Allah keep us united in this Duniya. And reunite us in jannah ♥️. Fabi ayyi ala-e rabbekumaa tokazzebaan. Which of the favours of your lord will u deny ♥️,” she captioned the photo.

“In the name of Allah, the Most Gracious, the Most Merciful Brothers and sisters! Today I am talking to you standing at a crucial juncture of my life. I have been living the Showbiz (Film Industry) life for years, and during this time I have been blessed with all kinds of fame, honour and wealth from my fans for which I am grateful to them. But for a few days now, I have been possessed of the realization that: Is the real purpose of man’s coming into this world only to chase wealth and fame?,” she had written in her note in October after she announced that she is quitting the industry,” she had posted in October.

Sana Khan made her acting debut in 2005 with the Hindi film Yehi Hai High Society. After starring in Salman Khan starrer Jai Ho, she participated in the Bigg Boss season 6.