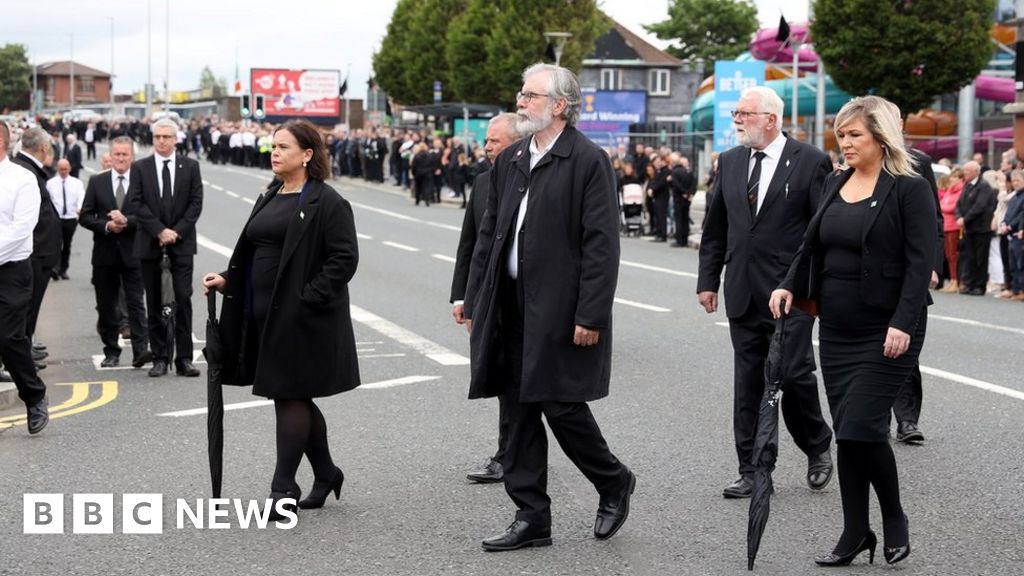 Ms O’Neill said the funeral had taken place “in accordance” with coronavirus guidelines.

She was among hundreds of mourners in west Belfast on Tuesday.

Current coronavirus regulations state a maximum of 30 people are allowed to gather together outdoors.

There has been widespread criticism of Ms O’Neill and her party colleagues who attended the funeral.

“It was all done in accordance with the guidelines,” Ms O’Neill told the Irish News.

She said the cortege had a “maximum of 30 people in it” and that the service at St Agnes’s Church had been “exemplary” in relation to social distancing and hygiene.

Inside the church only three mourners shared a pew, she said.

The BBC understands about 120 mourners were inside the church

The Sinn Féin vice-president added: “Regrettably a considerable number of family members were unable to take part in the cortege as a result of current restrictions, like many other families who have been unable to properly grieve or mourn the loss of a loved one in a traditional way as a result of the Covid crisis.

The Police Service of Northern Ireland (PSNI) said on Tuesday it would review footage of the funeral and “consider any suspected breaches of the Health Protection (Coronavirus Restrictions) Regulations NI 2020”.

Ms O’Neill is due to appear before the Executive committee at Stormont later on Wednesday alongside First Minister Arlene Foster.

DUP MP for East Londonderry, Gregory Campbell, told BBC Radio Foyle it would give the deputy first minister the opportunity “to apologise for the hurt and harm and anguish that she has caused”.

“The people who set the regulations, in other words Michelle O’Neill, have to be very, very clear and precise that they cannot be seen to be physically breaching the regulations that they have set, ” he said.

“That is what is causing the anguish and anger in the wider community.”

“I am surprised we would have someone from the executive being in a position where it could be perceived not to be doing that [following the regulations],” he added.

“It is not something I would have done. “

Speaking on BBC Radio Ulster’s Nolan Show Mr Beattie said she had “absolutely damaged the office of the Executive by her actions”.

Kellie Armstrong of the Alliance Party also called for Ms O’Neill to resign.

Mr Swann said he hoped “this isn’t the Dominic Cummings effect in Northern Ireland because quite frankly our health service can’t afford it to be”.

“There is no person, or position, or point of privilege that is above the guidance we had laid down, no one is immune from it,” he said.

Sources within the local churches have expressed concern about the deputy first minister’s claim that the arrangements for the funeral service for Bobby Storey within St Agnes’s Church in West Belfast were “exemplary”.

It’s understood that in a call last Wednesday with the chief medical officer, chief scientific adviser and two junior ministers, church representatives were told that the change in rules enabling social distancing at regular religious services did not apply to funerals, weddings and baptisms.

A letter published on the executive website summarised the latest guidance on social distancing for places of worship passed on to the faith leaders.

However the letter states that “weddings, baptisms and funerals are not covered by the advice below. The executive will consider this further early next week.”

It’s understood the churches then advised other families planning funerals for this week that the maximum attendance for funerals of 10 people remained in place.

After the TV pictures of Bobby Storey’s funeral emerged, it’s believed the Bishop of Down and Connor Noel Treanor sought clarity from the executive.

However this guidance was not communicated to the churches prior to Bobby Storey’s funeral and its status remains uncertain.

A number of other politicians have also voiced concern over the funeral.

In a tweet, Justice Minister Naomi Long, leader of the Alliance Party, said when the rule makers break the rules it is more hurtful “for all who made huge sacrifices to obey the regulations”.

She said gathering in crowds “for any reason is dangerous”.

SDLP leader Colum Eastwood said: “Today’s [Tuesday’s] display showed a blatant disregard for the sacrifices made by so many.”

In the assembly, Traditional Unionist Voice leader Jim Allister said the executive’s credibility had been undermined by the appearance of the deputy first minister and other MLAs “in flagrant breach, it would appear, of some of those regulations”.

There have been a number of events which have been criticised for attracting crowds during the Covid-19 pandemic.

In May, a senior police officer said there had been social-distancing breaches at funerals in both the unionist and nationalist communities.

Earlier in June, protestors at Black Lives Matter rallies in Belfast and Londonderry were fined, while several hundred people took part in a “save our statues” rally at Belfast City Hall.

Mr Storey died at the age of 64 following a period of illness.

He was considered the head of intelligence of the IRA for a period from the mid-1990s and was named as such under parliamentary privilege.

Security sources linked him to several major incidents, including the £26m Northern Bank robbery in 2004.

Daniel J. O'Neill
Daniel J. O'Neill is Politics Guy. He is capturing Politics since a decade now. Earlier he use to do it fo SJ and now for us. He just loves to understand and go behind every bit of political news out there and cover it for us, so that we can get it to you.
Share
Facebook
Twitter
Pinterest
WhatsApp
Linkedin
ReddIt
Tumblr
VK
Digg
Previous articleAirbus is cutting 15,000 jobs because of the pandemic
Next articleSushant Singh Rajput’s family calls Shekhar Suman and Sandip Ssingh’s press conference with Tejashwi Yadav a ‘political gimmick’ | Hindi Movie News – Bollywood – Times of India
- Advertisement -

Lockdown fines should be reviewed – MPs