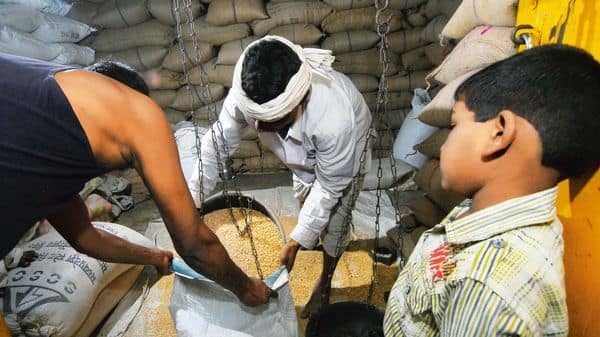 Prime Minister Narendra Modi on Tuesday extended by five months a programme to distribute free foodgrain to the poor to shield them from disruptions caused by India’s prolonged lockdown that has caused severe income losses.

As many as 800 million of the country’s poorest will get 5kg of wheat or rice and 1kg of gram every month till November, continuing the PM Garib Kalyan Anna Yojana that started in April, Modi said in a televised speech. This will involve an additional government spending of ₹90,000 crore, he said.

The Modi government has been trying to help the financially weak, migrant workers and farmers, sections that have been the worst hit by the coronavirus pandemic-related lockdown.

Despite one of the longest and strictest lockdowns, India has been unable to control the spread of the virus and has now become the fourth worst-affected country in the world in terms of the number of covid-19 infections. India started reopening its economy in phases beginning 8 June, allowing more people to return to jobs.

Modi’s move to extend the foodgrain programme comes in the backdrop of Congress chief Sonia Gandhi urging him to consider extending the free foodgrain scheme for three more months till September.

India unveiled a ₹1.75 trillion relief package for the poor under the Pradhan Mantri Garib Kalyan Yojana on 26 March. The package included cash transfers, higher wages under the rural employment guarantee programme, and a one-time transfer of ₹500 per month for three months to women’s Jan Dhan accounts.

The government also wants to cover all ration cardholders under ‘one nation, one ration card’ scheme by March 2021, under which eligible beneficiaries will be able to avail their entitled foodgrain under the National Food Security Act from any fair-price shop.

On Monday, the Union home ministry extended the lockdown in containment zones till the end of July, but tried to minimize movement curbs to boost economic activity. The guidelines eased night-time curfew and allowed more than five people to visit a shop at a time. “In the coming days, we will further strengthen our efforts and continuously work to empower the poor, downtrodden and deprived sections of society. While taking all the precautions, we will further expand economic activities. We will work ceaselessly for Atmanirbhar Bharat. We all will be vocal for local,” Modi said a day after India banned 59 Chinese apps, including TikTok, Vigo Video and Helo.

Modi, however, didn’t address the heightened tensions along the Line of Actual Control with China.

In his speech, Modi cautioned against carelessness after the lockdown was ended.

“But we have also seen that since Unlock 1.0, there is increasing negligence in personal and social behaviour. Earlier, we were very careful with respect to wearing of masks, social distancing and washing of hands for 20 seconds. But today, when we need to be more careful, increasing negligence is a cause of worry,” he said and added, “Those not following the rules will need to be stopped and cautioned.”

Daniel J. O'Neill
Daniel J. O'Neill is Politics Guy. He is capturing Politics since a decade now. Earlier he use to do it fo SJ and now for us. He just loves to understand and go behind every bit of political news out there and cover it for us, so that we can get it to you.
Share
Facebook
Twitter
Pinterest
WhatsApp
Linkedin
ReddIt
Tumblr
VK
Digg
Previous articlePak’s ‘use & throw’ policy renders Geelani irrelevant | India News – Times of India
Next articleRecycling of beer and IMFL bottles to draw purchase tax: SC | India News – Times of India
- Advertisement -

Lockdown fines should be reviewed – MPs