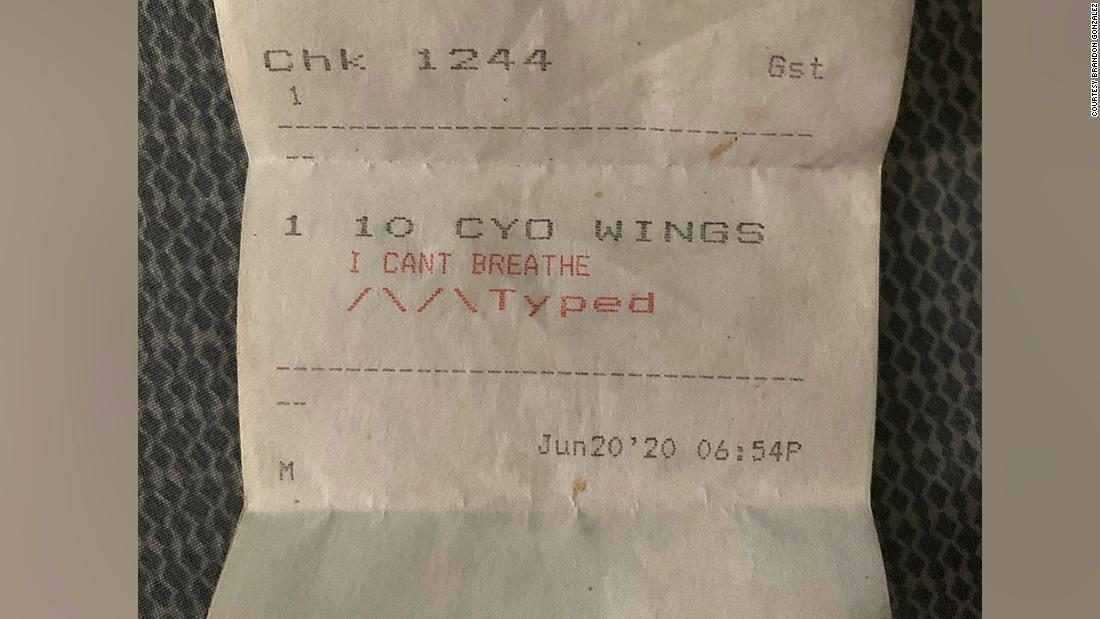 Brandon Gonzalez, who has worked at Hole in the Wall since January, said he was bringing over chicken wings to his customers at the southwest Miami-Dade restaurant on June 20 when he said he noticed the name change.

“When I saw what he wrote, I was in awe that someone would try and make this a joke,” Gonzalez told CNN. “He had walked up to the kitchen staff to make sure they saw what he wrote. Which baffled me. It was gross. I couldn’t imagine an owner of an establishment making a joke of that caliber. If you even want to call it a joke.”

The dying words of George Floyd, a Black man who died after a a police officer kneeled on his neck, were “I can’t breathe.” His death sparked weeks of protests in cities across the nation — and chants of “I can’t breathe” often reverberated amongst the crowds.

Gonzalez said the owner, identified by the establishment as Sam Diedrick, joked that instead of writing “blackened” to refer to the chicken seasoning that comes on the meal, they would write “I can’t breathe.” Gonzalez said he and other employees who were present “stayed quiet and looked away.”

According to Florida state documents, Diedrick is a co-owner of the restaurant. An employee at the restaurant confirmed to CNN Diedrick “owns a piece” of the establishment.

Diedrick and the other restaurant owner did not immediately respond to CNN’s request for comment.

“We apologize to our customers and employees. It is reprehensible and goes completely against our values. We have taken immediate action by suspending Mr. Diedrick. We will be engaging directly with each of our employees to listen to their concerns and explain to them the steps we are taking to ensure this never occurs again.”

The 25-year-old said he collected his tips, finished his shift, and quit the job the next day.

“All I know is I don’t have kids, I don’t need this job, and I sure as hell won’t work for a racist,” Gonzalez added.

“George Floyd’s video online wasn’t just a retweet. This man lost his life due to police brutality. It’s nothing to joke about. This movement is real life. We need change and we need it now.”

Jessica J. Jeanlouis
Jessica J. Jeanlouis is one women we know who is talented when it comes to compile any piece of information in a way which is readable and sharable by every individual. Being in this field for 12 years, she has experienced everything in the world of news editing. She is truly an excellent Editor.
Share
Facebook
Twitter
Pinterest
WhatsApp
Linkedin
ReddIt
Tumblr
VK
Digg
Previous articleIndia bans TikTok as tensions with China escalate
Next articleNBA and players union to paint ‘Black Lives Matter’ on courts in Orlando when season resumes, source says
- Advertisement -