NAFTA is officially gone. Here’s what has and hasn’t changed 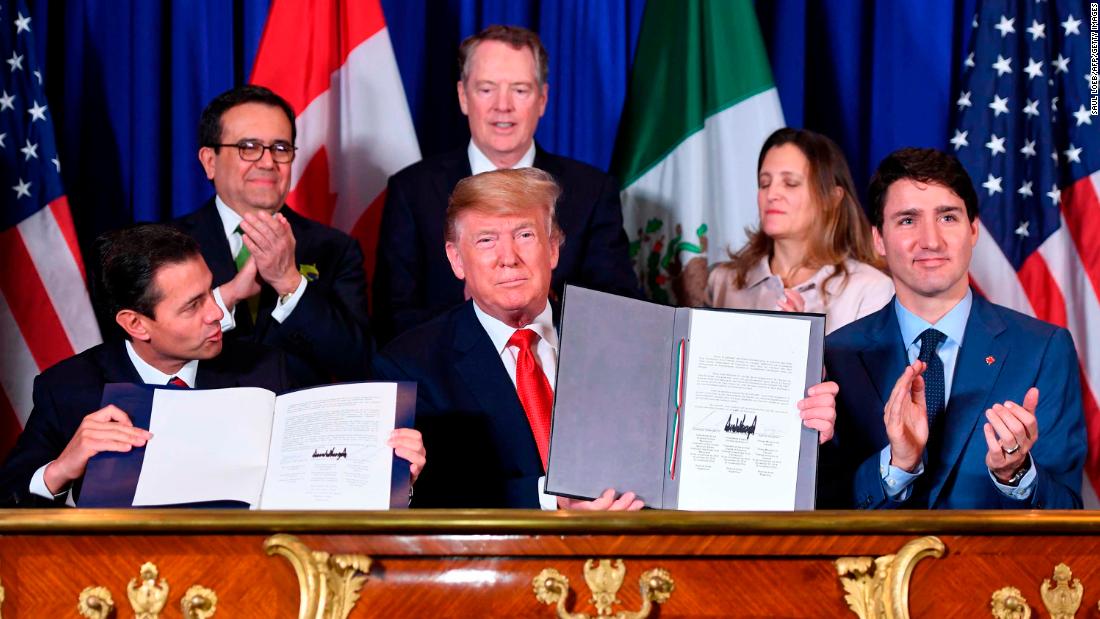 News oi-Srushti Jayadev | Updated: Sunday, July 12, 2020, 1:43 ...
Read more
The new agreement was signed by Trump and his Mexican and Canadian counterparts in 2018 and approved by Congress earlier this year after Democrats added stronger labor rules.

It was touted by the President as a major political win ahead of his reelection campaign but has since been overshadowed by the coronavirus pandemic and other crises.

Much of USMCA simply updates the 25-year-old agreement it’s replacing. It’s expected to create 176,000 jobs after six years and increase US GDP by 0.35%, according to a report released last year — long before the pandemic — by the US International Trade Commission, a federal government agency. By comparison, the United States added more than 152,000 jobs in January 2020 alone.
But the deal provides certainty for business groups and farmers who feared Trump would rip up NAFTA without having a new deal in place, a move he threatened several times.
The USMCA stands in contrast to Trump’s efforts to renegotiate trade terms with China. After more than a year of negotiations, a preliminary agreement signed in January falls short of resolving major issues with intellectual property theft and forced technology transfers. It leaves tariffs on billions of dollars of goods in place and it’s unclear whether China will keep its promise to more than double its purchases from American farmers.
Trump has opted for bilateral deals and inked new agreements with South Korea and Japan. He pulled the United States out of the 12-country Trans-Pacific Partnership, known as TPP, that was negotiated by the Obama Administration.

Here are some of the key changes in the USMCA:

The USMCA creates a new incentive to build cars and trucks in North America. It requires 75% of a vehicle’s parts to be made in one of the three countries — up from the current 62.5% rule — in order to remain free from tariffs when moving between the three signatory countries.

It also requires more vehicle parts to be made by workers earning at least $16 an hour, which may provide a boost to manufacturing in the United States, where wages are higher than in Mexico.

The International Trade Commission report found that these changes would add 28,000 jobs in the industry over six years, while also leading to a small increase in the price of vehicles that consumers pay. Though, a Trump administration report was more positive, projecting that the deal would create 76,000 auto jobs over five years.

Manufacturing workers have long blamed NAFTA for sending jobs to Mexico, where wages are lower, and it was a priority for Democrats that the USMCA strengthen the enforcement of labor rules, creating a more level playing field for American workers.

Democrats struck a deal with the Trump administration to strengthen the enforcement language in the deal. The changes were able to win the backing of the AFL-CIO, the largest federation of unions in the United States.

The deal provides for an interagency committee that will monitor Mexico’s labor reform implementation and compliance with labor obligations. It also, for the first time in any US trade agreement, allows for “rapid response” panels to review whether specific facilities are violating workers’ rights and to levy duties or penalties on products made at those facilities.

The original NAFTA eliminated tariffs on most agricultural products traded among the three countries. Canada and Mexico are already the two biggest export markets for US farmers and ranchers.

The USMCA will keep those tariffs at zero, while further opening up the Canadian market to US dairy, poultry and eggs. In return, the United States will allow more Canadian dairy, peanuts and peanut products, as well as a limited amount of sugar, to cross the border.

Updating NAFTA for the digital era

The USMCA includes sweeping new benefits for the technology sector, in a chapter on digital trade that wasn’t a part of the original NAFTA. The new provisions aren’t expected to directly create new jobs but could provide a boost to US businesses in other ways.

The agreement provides $600 million to address environmental problems in the region — like sewage spillovers from Tijuana that impact San Diego — and makes regulations easier to enforce by doing away with a requirement to prove a violation affects trade.

While the new enforcement measures pleased most Democrats, they didn’t go far enough to get environmental groups like the Sierra Club to support the agreement.

Jessica J. Jeanlouis
Jessica J. Jeanlouis is one women we know who is talented when it comes to compile any piece of information in a way which is readable and sharable by every individual. Being in this field for 12 years, she has experienced everything in the world of news editing. She is truly an excellent Editor.
Share
Facebook
Twitter
Pinterest
WhatsApp
Linkedin
ReddIt
Tumblr
VK
Digg
Previous articleCRPF jawan, civilian killed in Sopore attack
Next articleCapitol Hill grappling with Confederate statues and tributes to racists
- Advertisement -