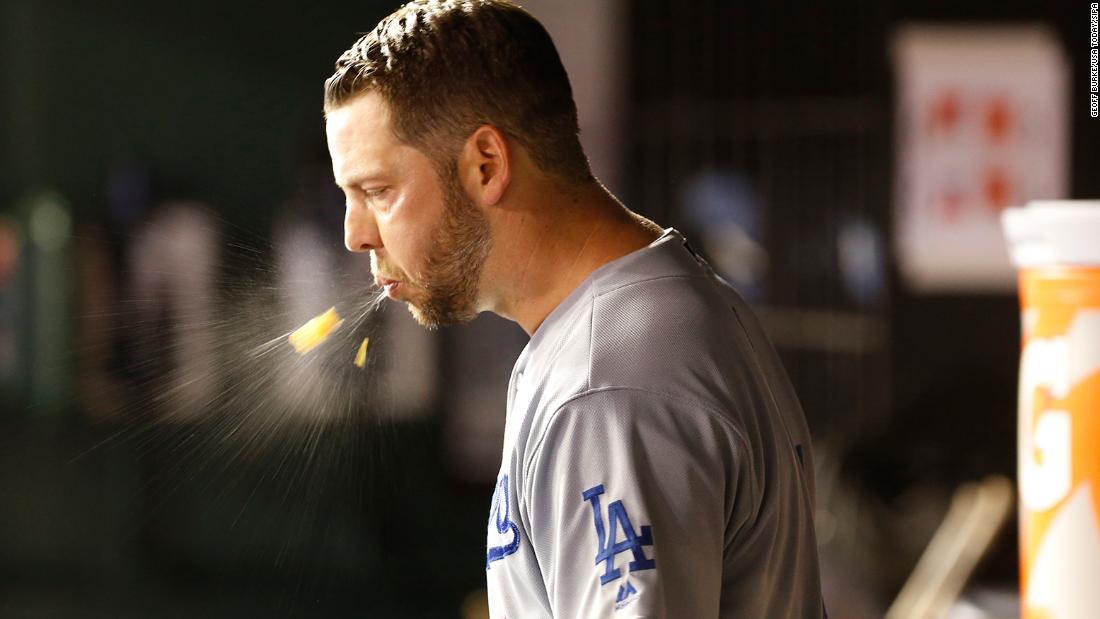 Pitchers used to spit on balls. In the outfield, guys pepper the grass with slobbery sunflower seeds while waiting for the hours to pass.

Pound for pound, baseball players probably produce more spit than the entire brass section of an orchestra. It’s just part of the game!

Baseball has a long, proud history of expectoration, but now it’s just an other weirdly sentimental tradition we never would have missed if our pandemic reality hadn’t snuffed it out.

But why do baseball players spit so much? Like many traditions, the origins are unclear and shrouded in romanticism and nostalgia. But there are a few theories:

It’s a holdover from the chewing tobacco days

Baseball, in general, suffers from a bit of oral fixation. Maybe it’s the long innings or the pressure of the game, but through the years, it seems like players have always had something in their mouths.

While chewing tobacco was popular among players all the way back to the game’s American origins in the 1800s, it got a big boost in the 20th century with the rise of tobacco advertising.
According to Fangraphs, a baseball reference site, legendary players in the early 1900s, like Ty Cobb and Cy Young were big fish for tobacco advertisers, and their faces were plastered on collectible, oh-so-irresistable “tobacco cards” that advertised both the product and the player.

So yes, the history of tobacco and baseball cards are intertwined.

Around the 1950s, chewing tobacco got more popular, and baseball players were the perfect combination of customer and spokespeople. In fact, smokeless tobacco was only officially banned in the MLB in 2016.

As smokeless tobacco became more unpopular over the years, a few iconic, fan-friendly alternatives cropped up.

Chief among them were sunflower seeds and chewing gum. To this day, it’s a wonder there aren’t giant yellow blooms in every outfield, given how many sunflower seed hulls often litter the grass there during every game.

The snack became popular among big names in the 1950s, but according to a 1980 Sports Illustrated article (with the fantastic title, “The Seeds of Content,”) it was Hall of Famer Reggie Jackson’s penchant for the seeds that led to more widespread popularity in the late 1960s.

In the same article, then-Detroit Tigers pitcher Dave Rozema said sunflower seeds gave “something to spot for those guys who didn’t chew.”

It’s also worth noting baseball is the only major American sport where players routinely snack during a game.

Spit is just part of the game

Putting aside snacks and compulsive chewing and other odd little behaviors that incubate during the long, hot hours in the dugout, spit has historically played a part in how players, well, play.

It’s not uncommon for players to spit into their gloves to soften the leather (though many experts say this is bad for it).

There also used to be a type of pitch called a spitball, when a pitcher would literally spit on the ball or lick his fingers and rub them around on the ball before throwing it.

Given that all of this happened before 1920, when the spitball was officially banned, said spit would often be — you guessed it — tobacco spit.

A lot has changed in 100 years, in the baseball world and beyond, and it’s pretty depressing thinking of how the coronavirus may have a long-term impact on the sport we all love.

Will players have to delicately pick the sunflower seeds out of their mouths, one by one? What other compulsive, boredom-killing activities will they pick up instead? Knitting?

At least we don’t have to deal with tobacco slime-covered fastballs anymore.