From Indigenous tournaments to the Olympics, it’s all about family – CBC Sports 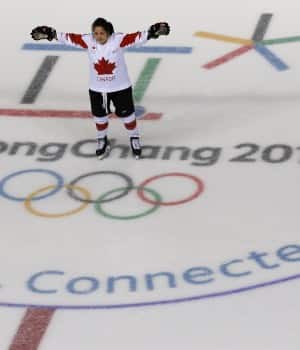 I have a favorite memory of my sister and I at the Tony Cote Winter Games with the Yorkton Tribal Council. My late grandpa, Bill Bryant, took care of us at the tournament, because my parents had to work.  He was always so proud of us, and he loved to watch us play hockey, especially when we were representing our tribal council.  To be honest, we didn’t do all that well that time, but the memory sticks with me.  Grandpa was there watching, spending time with us

A lot of the stickhandling “moves” I picked up were at native tournaments. The games there taught you to play with your head up, and how to pick up the puck with your stick, Lacrosse style. They taught you to be aware at all times.  I learned by watching.  I noticed that the older players often used head fakes, and almost always did evasive moves with the puck. You learned how to sauce a pass through other players.  You saw this all at the tournaments, every single shift.  It’s Rez hockey.

Native hockey is very creative as well. It can look non- structured at times, but it is very rewarding when you find success.  It’s hard to describe – anything goes on the ice. If a move doesn’t work, you try it again until it does.  You’re not afraid to make a mistake.  It’s freeing. I’ve learned many different skills by playing this way, and I credit this type of hockey for how I am on the ice. It has helped me get where I am.

Clinton L. Miller
Clinton L. Miller is our Sport Editor. He's been following Sports since a very long time and he himself is an awesome baseball player. He has worked at Ethical Editor since its launch.
Share
Facebook
Twitter
Pinterest
WhatsApp
Linkedin
ReddIt
Tumblr
VK
Digg
Previous articleMore could have Covid immunity than tests suggest
Next articleSushant Singh Rajput Googled himself hours before his death? – Times of India ►

The Hundred Proved a Tremendous Success, but Will the ECB Achieve its Goal?