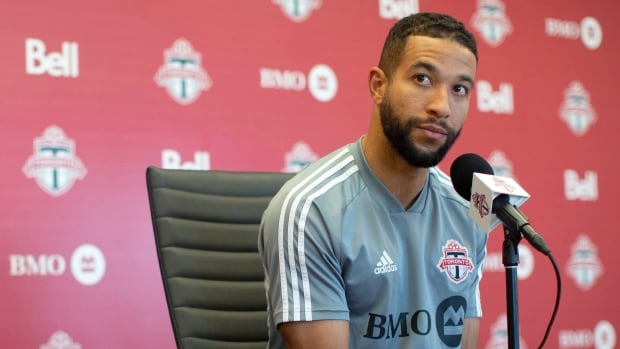 Toronto FC and its supporters have combined forces in a stand against racism.

Fans from the south end of BMO Field, home to the MLS club supporters’ groups, made a giant banner showing a clenched fist below the words “Love Football, Hate Racism.”

After the tifo was delivered Tuesday to the club’s north Toronto training ground, 39 TFC players and staff formed a circle around the banner in the middle of one of the pitches.

The club tweeted “we stand together with our Southend supporters.”

The MLS franchise has mobilized in recent week in support of Black Lives Matter and the fight to end racism.

Toronto fullback Justin Morrow is executive director of the newly formed Black Players Coalition of MLS. Jozy Altidore, Ifunanyachi Achara, Richie Laryea and other TFC players have been vocal about the need for change, as have assistant coach Jason Bent and GM Ali Curtis.

The NHL has seemingly decided on its hub cities for when the league returns to play, according to multiple reports on Wednesday: Toronto for the Eastern Conference...
Read more
Sports

Dr Ian Banks has not been able to hold his grandson Lorcán since he was diagnosed with cystic fibrosis (CF) as a newborn baby.In...
Read more