Face masks: How to minimize the waste during COVID-19 | CBC News 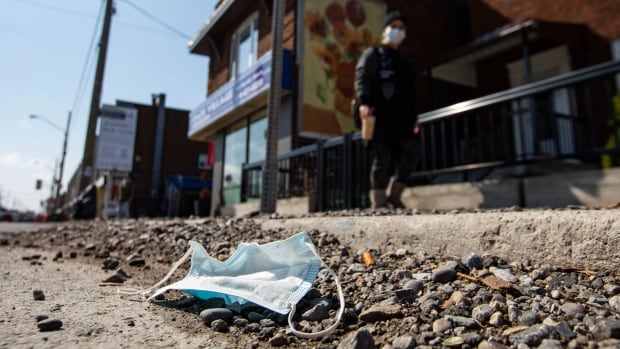 Hello, people! This is our weekly newsletter on all things environmental, where we highlight trends and solutions that are moving us to a more sustainable world. (Sign up here to get it in your inbox every Thursday.)

Face masks: How to minimize the waste during COVID-19

More and more people are being asked to wear masks in an effort to reduce the spread of COVID-19 — from workers at businesses, such as Tim Hortons, to customers at stores, such as Longo’s supermarket. The idea is that wearing a mask will protect those around you by blocking some of the droplets from your mouth.

But an unfortunate side effect of widespread mask wearing has been a lot of litter that could be infected with the novel coronavirus, prompting threats of fines from officials in Toronto and Vancouver. A few What on Earth? readers wrote in expressing concern about the waste — even if the masks are properly disposed of.

“Assuming that front-line workers and ordinary people combined will consume on the order of 100 billion masks, gloves, gowns, swabs, etc. this year, it amounts to a waste pile in the millions of tonnes,” wrote Jens Happe, before concluding, “This number can only increase.”

Maria Torres of Calgary wrote, “It seems that [using] reusable face masks is what is necessary to do, pronto. Millions of face masks will choke our Earth, not to mention the other disposable PPE [personal protective equipment].”

So, what is the best way to minimize the waste from masks? Here’s a look at the options.

These are tight-fitting masks that block out most particles and are used primarily by health-care workers, especially those doing risky procedures such as inserting breathing tubes in COVID-19 patients.

They’re recyclable, according to manufacturer 3M. But hospitals in some provinces, such as Alberta, are asking workers not to put them in recycling bins anymore. Instead, they’re being saved for cleaning and reuse.

Techniques to clean them have been successfully tested in Saskatchewan and Manitoba, and Health Canada has approved a mask-sanitizing technology developed by Beamsville, Ont.-based Clean Works that is being sent to health-care facilities in Nova Scotia and Ontario. The technology was originally developed to sanitize fruits and vegetables.

These disposable, looser-fitting masks are widely used by health-care workers, other essential workers and the public. They’re generally made of non-woven polypropylene and are not normally considered recyclable. Municipalities ask that they be put in the garbage.

Public health officials usually don’t recommend these or N95 masks for the public, in order to ensure a supply for health-care workers. Instead, they ask that the public wear non-medical masks.

These are typically sewn from fabric and are washable and reusable — so definitely, the best low-waste option. To reduce your impact further, you can buy or make one from upcycled materials, such as T-shirts, pillowcases, pyjamas, tote bags, tea towels or scrap fabrics.

A 2013 study found tea towels had the best filtration efficiency – but stressed that homemade masks should be considered only as a last resort. The same study suggested cotton works better than silk or linen. A more recent study found a layer of tightly woven cotton with two layers of polyester-based chiffon, cotton-polyester flannel or silk worked well.

The environmental group Greenpeace has posted material lists and instructions to make several different kinds of masks from upcycled materials, including a no-sew version. (“Bonus points if you don’t buy anything new!” it said.)

For ties, Greenpeace suggests hair ties, elastics, bias tape, string, twill cord, shoelaces or strips of fabric. You can also use a coffee bag twist tie as a nosepiece to give the mask a better fit, it said.

Don’t want to make your own? Doing a web search for “upcycled mask” turns up lots of options.

What’s on your mind?

Old issues of What on Earth? are right here.

Lockdowns related to the COVID-19 pandemic may have resulted in temporary decreases in carbon emissions from transportation and industry, but that doesn’t change the fact that methane levels hit a new record in 2019. According to preliminary data collected by the National Oceanic and Atmospheric Administration (NOAA) in the U.S., methane concentrations in the planet’s atmosphere reached nearly 1,875 parts per billion (ppb), up from 1,866 ppb in 2018. (In the chart below, “mole fraction” refers to the number of molecules of methane divided by the total number of molecules in the air sample after water vapour has been removed.) Some of the big contributors to methane emissions are livestock and oil and gas production as well as warming bodies of water from the Arctic to the tropics. While methane only stays in the atmosphere for about a decade, it traps significantly more heat than CO2 and is thus a significant contributor to global warming.

Hot and bothered: Provocative ideas from around the web

Tens of thousands of dormant oil and gas wells sit idle across Alberta, an inventory the province wants to shrink in the coming months with the help of $1 billion from the federal government.

But as Alberta implements its strategy for cleaning up orphan and inactive wells, there are calls for the provincial government to also look at using some of the funds to provide new opportunities for some sites.

Advocates say well infrastructure, such as wellbores, roads and pad space, could find other energy uses, including geothermal, micro-solar, hydrogen, recovery of lithium or carbon capture and storage.

“There’s a subset of those sites, a rather large subset, that are really good candidates for … other energy purposes,” said Marla Orenstein, director of the natural resources centre at the Canada West Foundation.

Alberta has nearly 3,000 orphan wells — oil and gas wells that haven’t been remediated by their often-bankrupt owners. (There are more than 90,000 inactive wells, which remain in corporate hands but sit idle for economic reasons.)

Last month, Ottawa announced it would provide Alberta with $1 billion to help clean up those sites, including a $200-million loan to the Orphan Well Association, an industry-funded group that cleans up orphaned infrastructure.

The provincial government has since announced oilfield services firms will be able to apply for grants under the oilfield rehabilitation program.

Orenstein said the money — and the jobs the work will create — is a good start. “If we can figure out how to direct that money toward not just reclaiming but also re-purposing, we’ll provide a real advantage to the province and the country,” she said.

Nothing in the plans that the province has announced so far includes funds for repurposing sites.

Tristan Goodman, president of the Explorers and Producers Association of Canada, said the vast majority of the funds should go to the clean-up work that was at the core of Ottawa’s announcement.

He agreed, however, that there is potential in repurposing older wells for geothermal in some circumstances. “But it’s not as simple as every well will be a geothermal candidate.”

Juli Rohl, who works for the Alberta-based Energy Futures Lab, suggested some old sites could be used for solar projects, as they may already have the road access, the lease, a gravelled site and nearby power lines to tie into.

But Rohl said there are questions of liability — namely, responsibilities any company may have to the actual owner of the land the wells are on.

She said startup companies that are able to re-purpose these sites “don’t have the ability to take on huge amounts of liability right [from] the get-go. And the operators, who are holding this liability, want to get it off their books.

“Sorting out who has the liability and how that’s handled in the future is the biggest question and the biggest challenge for this.”

Orenstein said there are also regulatory changes that would be required, like altering rules that say industrial sites have to be returned to their original conditions before they can be repurposed for new energy uses.

But if the government wants to make things happen, Rohl said, there are companies ready to go.

“It’s not as though we need to wait for the technology to catch up — we just need the framework for collaboration.”

Are there issues you’d like us to cover? Questions you want answered? Do you just want to share a kind word? We’d love to hear from you. Email us at [email protected].

Sign up here to get What on Earth? in your inbox every Thursday.

Jeffrey B. Gurrola
Jeffrey B. Gurrola is our tech editor for you. He is basically a techie guy. He just loves the technology to the core. Be it web or robotics or any technology this man covers it all. He always keeps track of the Tech Giants in the Silicon Valley.
Share
Facebook
Twitter
Pinterest
WhatsApp
Linkedin
ReddIt
Tumblr
VK
Digg
Previous articleMandatory 14-day quarantine for those from red zones
Next articleTrump administration shelves expert guidelines on reopening U.S. economy | CBC News

Smaller and better smartphone cameras are on the way

After union vote, Bezos vows to do better for Amazon workers

Mercedes rolls out luxury electric car in duel with Tesla