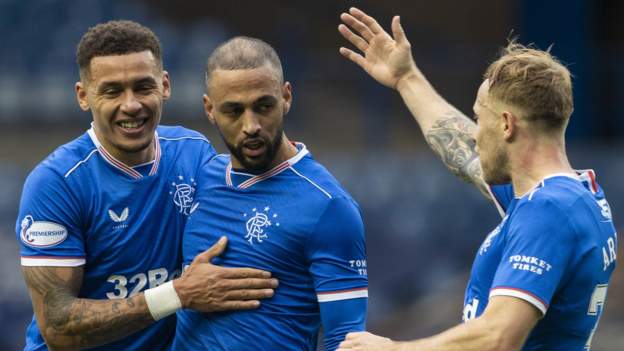 Rangers surged 11 points clear of Celtic at the Scottish Premiership summit as they romped to victory over Aberdeen.

A deflected long-range strike by Ryan Kent put Steven Gerrard’s side in front and Kemar Roofe doubled that advantage.

Scott Arfield’s shot went in off Shay Logan and James Tavernier got the hosts’ fourth from the penalty spot.

The win, Rangers’ 13th of 15 league games, signalled the Ibrox side’s best start to a season in 53 years.

Sam Cosgrove, Ryan Hedges and Matty Kennedy threatened for Aberdeen but they could not prevent an 18th victory and 17th clean sheet in all competitions this term for Rangers.

Celtic, who drew at Hibernian on Saturday, have two games in hand over Rangers and are four points clear of Aberdeen.

Kent stayed onside to receive Tavernier’s pass and only had Joe Lewis to beat but the Aberdeen goalkeeper made an excellent stop in an early attack.

Lewis also smothered at the feet of Joe Aribo but the keeper was left helpless when Kent’s 35-yard effort took a nick off Tommie Hoban and went in off the post.

The visitors, without a glut of players because of injury and Covid-19 issues, had spent the first quarter of the match largely in their own half.

But a Hedges break drew Rangers in and allowed the winger to release Cosgrove, whose shot was touched out by Allan McGregor. The Rangers keeper also kept out a Hedges effort after another speedy advance by the Wales cap. 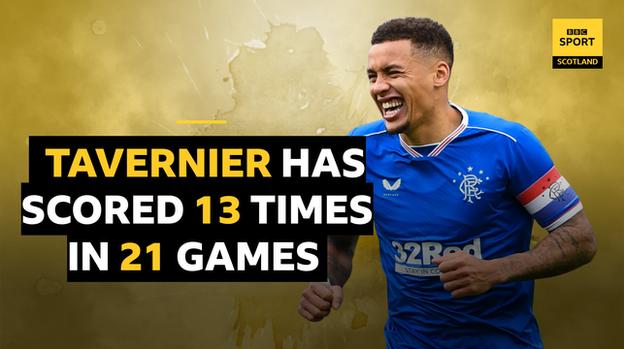 Aberdeen soon found themselves two down as Roofe took an excellent touch to control Connor Goldson’s chip forward and fire in off Lewis’ despairing save.

The Pittodrie side were not discouraged and Cosgrove and Hedges combined for the latter to get away a shot that Goldson blocked and Matty Kennedy tested McGregor with a well-struck free-kick.

But any optimism Aberdeen took into the second half quickly evaporated as Kent set up Arfield and the Canada midfielder’s left-foot shot smacked off Logan to wrong-foot Lewis.

Andy Considine was then penalised for grappling Leon Balogun to the ground and captain Tavernier scored for the 13th time this season.

Dean Campbell was sent on for Aberdeen and almost scored an own goal at a corner, Lewis coming to his rescue with the save.

And 16-year-old Ryan Duncan made his Dons debut as a substitute in the closing stages.

Man of the match – Ryan Kent

What did we learn?

Rangers’ record this season made them favourites pre-match, particularly in light of Aberdeen’s selection woes but Aberdeen had more reason than most to travel to Glasgow with optimism.

Derek McInnes’ side had drawn at Ibrox in February and had won two of their past five trips to the stadium and going forward, at least, they created problems through Cosgrove and Hedges.

Defensively, though, they struggled to cope with Rangers’ variation of short and long passes. However, they can count themselves unfortunate with the deflections for two of the goals they lost.

For Rangers, the stats continue to impress. Sixteen goals racked up in November to date and their unblemished defensive record at home in the league extends to an eighth game.

What did they say?

Rangers manager Steven Gerrard told Sky Sports: “Very pleased. I thought we were dominant, I thought we were strong throughout. Four good goals, clean sheet and maybe could’ve had a few more towards the end so I can’t ask for any more from the players, really.

“Some of the quality at times was outstanding. We’ve had a very positive, strong start. We keep moving forward. It’s still November. We know there’s a lot of hard work to do. We certainly won’t be getting carried away.”

Aberdeen manager Derek McInnes told Sky Sports: “Everything was conspiring against us, whether it was a couple of deflections or a soft penalty. It was a tough, tough afternoon for us after that, clearly.

“I’ve got to applaud the players for just sticking with it. This is a good Rangers team, they make you work. They test your organisation and I thought box-to-box we were actually pretty good.”

Rangers resume their Europa League campaign on Thursday at home to Benfica (20:00 GMT), who are level on points with the Ibrox side at the top of Group D, before facing Falkirk in next Sunday’s Scottish League Cup tie (17:00). Aberdeen visit St Mirren in the last of Saturday’s cup matches (17:15).

Player of the match