Arsenal boss Mikel Arteta has told Mesut Ozil, 32, he has two months to prove himself at the club. The German World Cup-winning playmaker has not started a game for the Gunners since 7 March. (Express)

Barcelona and Real Madrid are monitoring the situation of Portugal midfielder Bruno Fernandes at Manchester United with a view to trying to sign the 26-year-old. (Sun)

Barcelona players have rejected a proposal to take a pay cut made by club president Josep Maria Bartomeu. (Marca)

Leicester City boss Brendan Rodgers says Islam Slimani, 32, is still part of his plans. The Algeria forward has not played for the Foxes since January 2018. (Telegraph – subscription required)

Newcastle United winger Rolando Aarons’ deadline-day move to Huddersfield Town fell through as paperwork for the 24-year-old was not submitted to the EFL in time. (Shields Gazette)

St Etienne manager Claude Puel says Arsenal’s 19-year-old French defender William Saliba “had a great desire to return” to the club on loan before a move collapsed in the summer. (L’Equipe, via Mail)

Former Premier League and Republic of Ireland striker Robbie Keane, 40, is to return to MLS side LA Galaxy as the club’s new manager. (Sun)

The Premier League has been warned it could face a government levy on broadcasting deals if it fails to improve a rescue package offer for the English Football League. (Telegraph – subscription required)

Manchester United women’s defender Abbie McManus, 27, has joked that her United-supporting dad is finally wearing her name on his shirt after her switch from rivals Manchester City. (Sun) 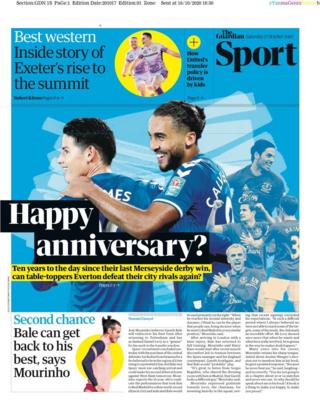