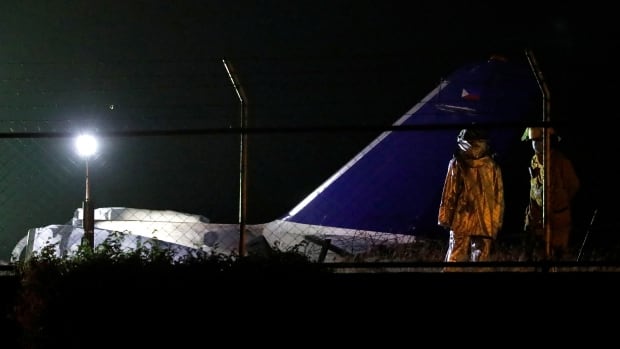 A medical evacuation plane exploded in a ball of flames during takeoff on Sunday in the Philippine capital, killing all eight passengers and crew on board, officials said.

Manila airport general manager Ed Monreal says the plane, which was carrying six crew members and two passengers, was on a medical mission to bring a patient to Tokyo when it caught fire at the end of the airport runway. He said there were no survivors. He says two of the eight on board were foreigners — one American and one Canadian.

The plane was on a medical mission to bring a patient to Tokyo when it caught fire at the end of the airport, Monreal said.

Video footage showed a huge plume of smoke rising into the night sky as fire crews doused the fuselage with foam.

Photos from our team on the ground. <a href=”https://t.co/5SYvVxkcZk”>pic.twitter.com/5SYvVxkcZk</a>

The plane was a twin-jet West Wind 24.

“Our fire and medic teams were already dispatched to NAIA Terminal 2 to respond to the plane crash incident involving Lion Air Flight RPC 5880. Eight passengers consisting of a flight medic, nurse, doctor, three flight crew, one patient and its companion were on board,” Richard Gordon, a senator and head of the Philippine Red Cross, said on Twitter.

“Unfortunately, no passenger survived the accident,” the Manila International Airport Authority (MIAA) said in a statement.

An investigation by the Civil Aeronautics Authority of the Philippines was under way, MIAA said.