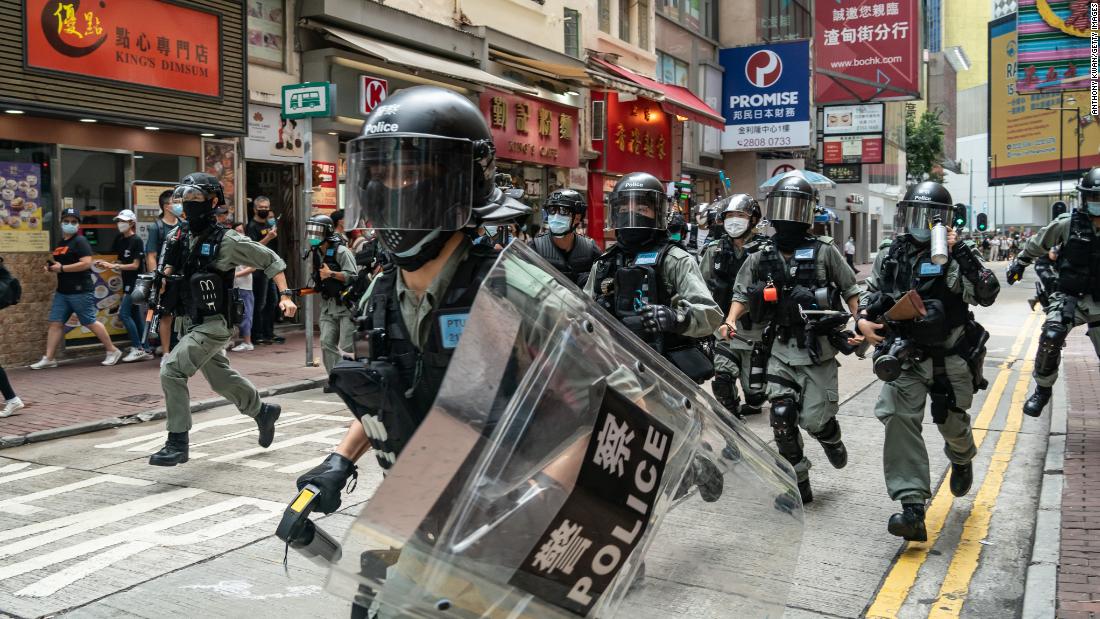 Hundreds turned out to protest the legislation in the busy shopping district of Causeway Bay but were met with a heavy security presence. Riot police fired pepper spray into the crowd, kettled and dispersed protesters, and deployed water cannons.

During the protest, Hong Kong police made the first arrests under the new law, including a man who was holding a black independence flag, and soon afterward a woman with a sign reading “Hong Kong Independence.”

At least 70 people were arrested on Wednesday, with two on suspicion of violating the national security law, according to police.

In vague language, the legislation criminalizes secession, subversion, terrorism, and collusion with foreign powers. People convicted of such crimes can face sentences of up to life in prison.

Fearing they could be targeted under the new law, several political and activist groups in the city formally disbanded in advance of the law being introduced Monday. On the streets, the effects could be seen elsewhere too, as shopkeepers tore down posters that supported anti-government protests, and many citizens hastily deleted social media posts and accounts.

One protester, who only gave the initials JM, said he would now consider using a virtual private network (VPN) to protect himself online and would even consider leaving the city.

“Its hard to not self-censor. I think most people will be more cautious,” he said. “Even though I don’t want to leave (Hong Kong) it’s time that I need to think about it.”

July 1 is traditionally a day of protests in the city but for the first time since handover, police did not give permission to protesters to hold peaceful demonstrations.

Despite the threat of stricter penalties, several hundred protesters did turn out chanting and waving flags. Police demanded they stop shouting pro-independence slogans — they also unfurled a purple flag warning protesters of being in violation of the new law.

On June 30, police commanders were told in a training session that anybody seen waving an independence flag or chanting for independence should be arrested, a police source said — as should anyone found in possession of independence flags.

The scene was a marked difference from a year ago when tens of thousands of people marched through Hong Kong’s streets protesting a bill that would allow China to extradite Hong Kong citizens. Protesters had stormed the city’s government headquarters, spray-painting messages in Cantonese and English on the walls of the legislative chamber demanding that the extradition bill be dropped. That fear may now be a reality under the new security law, which permits for certain cases to be tried in the mainland instead of Hong Kong.

On Wednesday, Hong Kong’s top official, Chief Executive Carrie Lam, said the law is a “crucial step to ending chaos and violence that has occurred over the past few months” in the city.

“The national security law is the most important development in securing ties between China and the Hong Kong Special Administrative Region since the handover,” she said, framing criticism of the law as “vicious attacks.”

What’s in the law?

The stringent new legislation and its 66 articles were kept secret from the public until the law went into effect and appear to offer the government, courts, police and authorities a roadmap to quash any hint of the mass anti-government protests that rocked the city last year.

Here are some of the key takeaways of the law, according to a translation from Chinese state news agency Xinhua.

Those found guilty could face life in prison:

China can take over cases and hold secret trials with no jury:

Other significant parts of the law:

The legislation has been widely criticized by opposition lawmakers in Hong Kong, human rights groups and politicians worldwide. Many worry it will be used to target political dissidents, activists, human rights lawyers and journalists amid the central government’s continuing crackdown on civil society under Chinese President Xi Jinping.

Opponents of the law say it marks the end of the “one country, two systems” — a principle by which Hong Kong has retained limited democracy and civil liberties since coming under Chinese control.

Crucially, those freedoms include the right to assembly, a free press, and an independent judiciary, rights that are not enjoyed on the Chinese mainland.

On Wednesday, the Chinese government staunchly defended the law, calling it a perfect embodiment of the “one country, two system” policy.

“If we want to implement ‘one country, one system,’ things would have been much simpler,” said Zhang Xiaoming, executive deputy director of China’s Hong Kong and Macao Affairs Office. “We could have directly applied Chinese criminal code, prosecution law and national security law to Hong Kong. Why would we go to such lengths to tailor-make a national security law for Hong Kong?”

Officials also brushed aside concerns over the law’s impact on freedom of speech, judicial independence and political diversity, reiterating that it targets only a tiny minority of people who intend to do real harm to Hong Kong.

“We don’t want to see (such occurrences), but we must set up a system that take such risks and factors into consideration,” he said.

Michael Tien, Hong Kong’s Deputy to the National People’s Congress, said the law was being blown “out of proportion” and that its main purpose was to “act as a deterrent.”

“It’s a short, sharp sword hanging over a minority of people,” Tien said. He added that he believes cases in which Beijing steps in and sends people to the mainland to be tried will be a “different level of crime.”

“I do not call rocking a bus or paralyzing the Hong Kong public transport as an imminent threat to national security,” he said.

But Jimmy Lai, a Hong Kong media tycoon known for his outspoken support of the city’s pro-democracy movement, said the law “spells a death knell to Hong Kong because it supersedes our law and our rule of law.”

On Wednesday, Canada updated its travel advice for Hong Kong, warning its citizens that they “may be at increased risk of arbitrary detention on national security grounds and possible extradition to mainland China.”

United States Secretary of State Mike Pompeo said it was a “sad day for Hong Kong, and for freedom-loving people across China” with the imposition of the national security legislation in Hong Kong.

He said the law “destroys the territory’s autonomy and one of China’s greatest achievements.”

Marvin Z. Kavanaugh
Marvin Z. Kavanaugh is a jack of all trades. He is basically a traveller. He travels across the globe to capture a news.
Share
Facebook
Twitter
Pinterest
WhatsApp
Linkedin
ReddIt
Tumblr
VK
Digg
Previous articlePlan to restart surgeries slowed by long-term care patients in N.S. hospital beds | CBC News
Next articleAmericans must unify against vast Covid-19 surge to avoid up to 100,000 cases daily, expert says
- Advertisement -

Across the US, street artists have been inspired by the death of George Floyd earlier this year. Tributes have appeared from California to Colorado...
Read more
World